This is a post I wrote back on December 30th 2018 after the final episode of what appears to be season 1 of a new Ghost Hunting show. In honor of Season 2 premiering on January 30th of 2020, I decided to revisit this review and repost it before the second season drops soon.

One day, back when I was a young, innocent, curse and obscenity knowledge free little girl at about 12-13 years old (2010-11?), I was looking on YouTube for a video showing how to get the world famous “If They Came To Hear Me Beg” Xbox achievement in Halo Reach. The first video that came up was by this channel with the hilarious name of Rooster Teeth. After getting the achievement (after 2 hours of trying and dying and crying), I saw a related video called “Fails of the Weak: Episode. 01 – Funny Halo Reach Bloopers and Screw Ups!” by the same channel. I they were pretty entertaining. There were only a few episodes up at this time by I made a youtube account so that I could subscribe and get an email whenever the weekly fails would air. With subscribing, I found that these guys had so many guides for all those achievements in all those games that make you want to rage quit, plus some funny short clips of random nonsense and a show of a guy with anger management issues just raging at games. Eventually, I would find one of my many biggest dedicators to my love of science fiction; Red vs Blue. I found Achievement Hunter when it was only about 2 years old but I’ve been one of their biggest fans since then. This time was also the rise of my interest in the paranormal, leading very quickly to my first actual ghost hunt, kicking off my hobby career as a paranormal investigator. Why are these two interests related? Well, they’re not. Achievement Hunter is a gaming channel, nothing about ghost and the spirit world at all. Until now at least.

(To view the full series, you must sign on to be a Rooster Teeth First Member. There is an option to try it for a month free, or you can pay $5 for one month)

I’m pretty sure no one saw this coming, Achievement Haunter. What is Achievement Hunter? A gaming channel, a group of entertainers, comedians, a couple anime voice actors, some science fiction actors, every appropriate label for these geeks that get paid to play video games and act stupid in their office daily, and out of nowhere they’re creating a ghost hunting show? As much as I love these guys, I actually went into their new Haunter show very skeptical. I am an investigator and I invest a lot of time and effort and even money to go to haunted places and obtain evidence and try to make contact with anything, so with these guys that don’t take too much seriously, I thought this would be taken as a joke and used as a new show to get in views and income. I would still watch it either way, I just wasn’t expecting true investigating.

What is apparently the “First seasons of 100 seasons” has been released and concluded in just the past couple months. I was actually surprised how true they stayed to the task. These guys were actually hunting for the paranormal and trying to make contact and get evidence. There were some good things recorded too. Real equipment was being used and used correctly, most of the time. The guys also got into the spirit of things by provoking specific spirits and recreating moments of intense historical energy that would have surely induced something, calling out for spirits to do something, to show themselves, to give them anything. There were some real moments, Lindsay Jones was allegedly touched, Jeremy Dooley was allegedly scratched, and Geoff Ramsey allegedly had an item thrown his direction (Allegedly is used multiple times to confirm everything is still in theory and cannot be proven 100%). I think provoking for activity is a good idea, if it doesn’t get too far. Some of their methods of provoking I would classify as a near Zak Bagans Danger Level. Mr Dooley was notorious for being the most threat provoking type, mostly making direct verbal threats and breaking things that would have been deemed Valuable to some, like smashing Elvis records at a place where the ghost of Elvis was thought to be. This guy also said his only dream was to “Punch a Ghost” (Really dude?). Let’s not also forget he and Ryan Haywood actually attempted to summon a demon, actually receiving weird activity in the process. Michael Jones joined in with smashing expensive looking pottery and glass decorations. Other methods were fine. I thought bringing a literal rave into the Hellfire Caves was interesting and could have grabbed anyone’s attention, but it unfortunately led to nothing. Jack Patillo dressing as Elvis and impersonating him would have surely gotten some weird looks from the deceased King of Rock himself, or maybe he’s used to there being a million impersonators in the world he’s no longer phased by yet another copier. I know it is dangerous but I believe creating fear similar to a fear once present will most often bring in very exciting evidence. Gavin Free was used as bait several times to illicit this fear, being the one that’s easily startled the most. I did not really agree with putting a dildo on an Ouija board, or the fact that two guys decided to purposely dress as nuns to scare “Fearless Leader Geoff,” he ended up leaving and no one investigated the supposed nun in the area after that, making it seem like her story wasn’t taken seriously.

(Image Description: Dim green picture to indicate night vision in being used in a dark room. Ryan Haywood, Gavin Free, and Geoff Ramsey in view with others off screen, sit at a table with an Ouija board. Ryan holds the flashlight for the rest to see the board while Gavin and Geoff hold the planchette on the board) 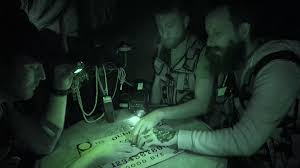 My biggest complaint was that the show was too comedic. It is in fact AH making this show, but I believe these shows should not be as “funny” as this one was made to be. I loved all the history recreations with members as characters in each story because knowing the history of each location is important before you explore it. There was just so many jokes, so many time period inaccurate crude humor, and lots of jokes about punching or getting laid by ghosts. It was still very funny to watch. During the investigations were better. There were still jokes and weird ways of provoking spirit activity, but they were serious when they needed to actually be so. I guess I’ve watched too many serious ghost hunting shows, where everyone is dead serious and funny moments a very scarce and are often used to calm down a heavy situation that’s gotten too far. I’ve never watched a real ghost hunting show that actually made me laugh at multiple points during it, there’s no such thing as a comedic yet real paranormal investigation far as I am aware of. Achievement Haunter is a first for everyone.

(Image description: Ghost Kitty in a Dark room; a piece of cloth cut and shaped like a cat with ears and eye holes and no legs hovers in the air, glowing an ominous light blue)

I really want to mention one particular moment in the hour long post show reflection podcast. Geoff Ramsey said himself that TV shows make all this fake stuff to make ghost hunting seem entertaining, but they wanted this show to be real. Evidently everyone discovered how boring it really is because evidence doesn’t just fly around on demand, there are many hours of sitting and waiting for something of remote interest to happen. I love that this was mentioned, and delivered just as it is: Ghost Hunting requires patience and will not always reward when you want it to. Sometimes you will just sit and ask for something to move a door for 3 hours, and then you just hear a light tap on said door. Maybe you ask 500 questions in one night and your digital recorder only has one EVP by the time the sun rises, and worse yet will be that it takes weeks to understand if it’s a voice or not and what it could have possibly said. It’s still thrilling, but no experience will truly be like those raw and extreme shows on the television screen.

(Image Description: Painted fan art of Geoff Ramsey dressed as an old church nun, black, short sleeved, wrapping around the front like a cloak and showing a gold cross under his left rib cage area, based off of his scene in the show when he was reenacting old events that happened at a religious location) 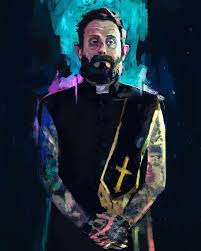 The show was still good. I learned to enjoy the comedy and enjoy the investigations too. I thought it was quite fun seeing my favorite gamers in this scenario. They actually got booked at several places, got educated in the histories, got paranormal tech savvy, and went to these places at night. Several times did everyone admit or allude to the fact they were a bit scared and unsure of what they were doing or why. The crew says there will be hundreds of seasons of this show, and I am already excited for season 2. I do recommend it to anyone interested in either major topic, whether for the ghosts or the crew or the comedy. Beware of the crude uncensored language and many sex jokes.

(Image description: Fan made cartoon comic of the main crew of Achievement Haunters stating some of the quotes said in the show in comic quote bubbles. From left to right: Jack Patillo holding a flashlight under his chin to cast a spooky shadow over his face and saying “Geoff I have an idea.” Ryan Haywood reads a children’s book to the outline of a ghost child, Lindsey Jones holds aforementioned ghost child in her arms saying “I’m her mom now.” Geoff Ramsey sits in the center of the comic with his head in his hands and a blank annoyed stare that stares straight forward. Michael Jones looks angrily towards Lindsey Jones and says “You have a baby!” Jeremy Dooley has an aggressive face and says angrily “Why won’t these ghosts fight me?!” Gavin Free is in the far right looking off screen with a panicked look while he calls out for his “Boy” 3 times)

There is one more thing that disappointed me: The Achievement Hunter Crew was at the Missouri State Penitentiary. I live about 30 minutes away from the Missouri State Penn, I’ve investigated that location twice (and we’ve begun planning a third). Some of my favorite celebrities were only 30 minutes away from my apartment, at a location I am very connected to, and I didn’t know until they were long gone. I could have had a free chance to meet these dudes and my favorite Gal of Rooster Teeth ever. Would have been a long shot, I would have most likely just been told to leave the area of filming, but still, the possibilities with the small chance I had…

Yours in Spirit- Raven

A Queer Spiritual Human Being Taking On Life. He/They, 24 View all posts by Caspian Raven